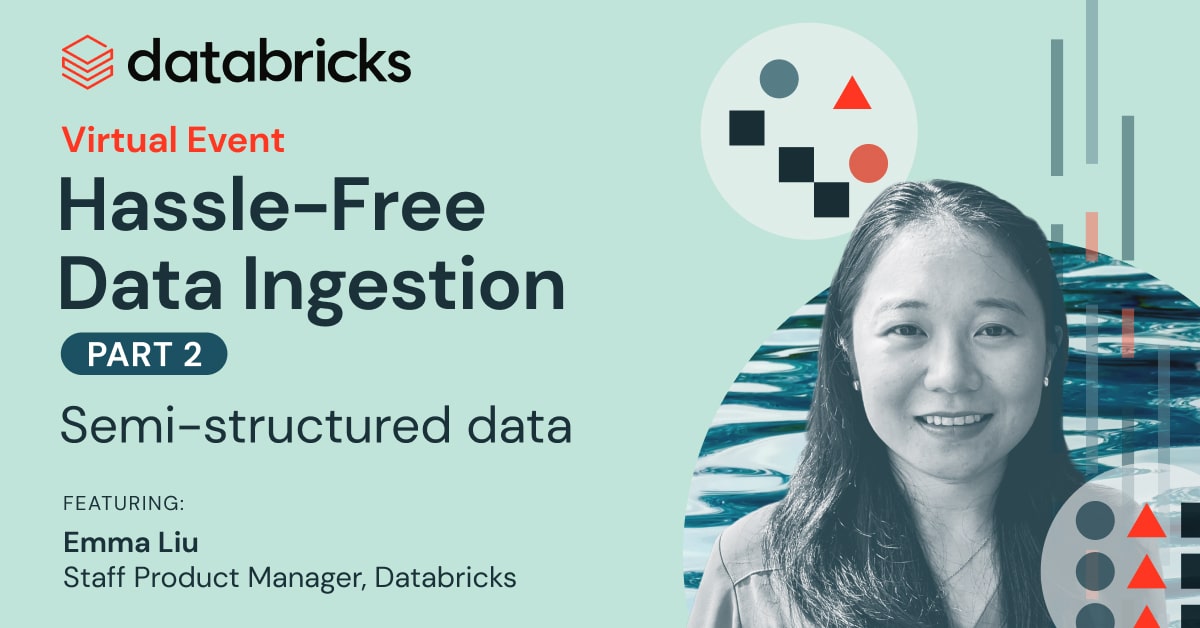 Ingesting and querying JSON with semi-structured data can be tedious and time-consuming, but Auto Loader and Delta Lake make it easy. JSON data is very flexible, which makes it powerful, but also difficult to ingest and query. The biggest challenges include:

In this blog and the accompanying notebook, we will show what built-in features make working with JSON simple at scale in the Databricks Lakehouse. Below is an incremental ETL architecture. The left-hand side represents continuous and scheduled ingest, and we will discuss how to do both types of ingest with Auto Loader. After the JSON file is ingested into a bronze Delta Lake table, we will discuss the features that make it easy to query complex and semi-structured data types that are common in JSON data.

Before discussing the general features of Auto Loader, let’s dig into the features that make ingesting the JSON extremely easy. Below is an example of how to ingest very complex JSON data.

Flexibility and ease of defining the schema: In the code above, we use two features of Auto Loader to easily define the schema while giving guardrails for problematic data. The two useful features are cloudFiles.inferColumnTypes and cloudFiles.schemaHints. Let’s take a closer look at the definitions:

Feature 1 – Use cloudFiles.inferColumnTypes for automatically inferring data types during the schema inference process: The default value for cloudFiles.inferColumnTypes is false because, in most cases, it is better to have the top-level columns be strings for schema evolution robustness and avoid issues such as numeric type mismatches(integers, longs, floats) during the schema evolution process.

Feature 2 – Use cloudFiles.schemaHints for specifying the desired data type to complement schema inference: Schema hints are used only if you do not provide a schema to Auto Loader. You can use schema hints whether cloudFiles.inferColumnTypes is enabled or disabled. More details can be found here.

In this use case (notebook), we actually set cloudFiles.inferColumnTypes to true since we want the columns and the complex data types to be inferred, instead of Auto Loader’s default inferred data type of string. Inferring most columns will give the fidelity of this complex JSON and provide flexibility for querying later. In addition, while inferring the column types is very convenient, we also know there are problematic columns ingested. This is where cloudFiles.schemaHints comes into play, working together with cloudFiles.inferColumnTypes. The combination of the two options allows for inferring most columns’ complex data types while specifying the desired data type (string in this example) for only two of the columns.

Let’s take a closer look at the two problematic columns. From the semi-structured JSON data we use in the notebook, we have identified two columns of problematic data: “ordered_products.element.promotion_info” and “clicked_items”. Hence, we hint that they should come in as strings (see data snippets for one of the columns above: “ordered_products.element.promotion_info”). For these columns, we can easily query the semi-structured JSON in SQL, which we will discuss later. You can see that one of the hints is on a nested column inside an array, which makes this feature really functional on complex schemas!

For example, in the accompanying notebook, an extra column named fulfillment_days is added to the data ingested by Auto Loader. This column is identified by Auto Loader and applied automatically to the Delta Lake table. Per the documentation, you can change the schema evolution mode to your liking. Here is a quick overview of the supported modes for Auto Loader’s option cloudFiles.schemaEvolutionMode:

The example above (also in the notebook) does not include a schema, hence we use the default option .option(“cloudFiles.schemaEvolutionMode”, “addNewColumns”) on readStream to accommodate schema evolution.

Feature 4 – Use rescued data column to capture bad data in an extra column, so nothing is lost: The rescued data column is where all unparsed data is kept, which ensures that you never lose data during ETL. If data doesn’t adhere to the current schema and can’t go into its required column, the data won’t be lost with the rescued data column. In this use case (notebook), we did not use this option. To turn on this option, you can specify the following: .option(“cloudFiles.schemaEvolutionMode”, “rescue”). Please see more information here.

Feature 5 – Use Trigger Once and Trigger AvailableNow for continuous vs. scheduled ingest: While Auto Loader is an Apache Spark™ Structured Streaming source, it does not have to run continuously. You can use the trigger once option to turn it into a scheduled job that turns itself off when all files have been ingested. This comes in handy when you don’t have the need for continuously running ingest. Yet, it also gives you the ability to drop the cadence of the schedule over time and then eventually go to continuously running ingest without changing the code. In DBR 10.1 and later, we have introduced Trigger.AvailableNow, which provides the same data processing semantics as trigger once, but can also perform rate limiting to ensure that your data processing can scale to very large amounts of data.

Feature 6 – Use Checkpoints to handle state: State is the information needed to start up where the ingestion process left off if the process is stopped. For example, with Auto Loader, the state would include the set of files already ingested. Checkpoints save the state if the ETL is stopped at any point, whether on purpose or due to failure. By leveraging checkpoints, Auto Loader can run continuously and also be a part of a periodic or scheduled job. In the example above, the checkpoint is saved in the option checkpointLocation . If the Auto Loader is terminated and then restarted, it will use the checkpoint to return to its latest state and will not reprocess files that have already been processed.

Until this point, we have used Auto Loader to write a Delta Table to a particular location. We can access this table by location in SQL, but for readability, we point an external table to the location using the following SQL code.

When ingesting data, you may need to keep it in a JSON string, and some data may not be in the correct data type. In those cases, syntax in the above example makes querying parts of the semi-structured data simple and easy to read. To double click on this example, let’s look at data in the column filfillment_days, which is a JSON string column:

Feature 7 – Use single colon (:) to extract the top-level of a JSON string column: For example, filfillment_days:picking returns the value 0.32 for the first row above.

Feature 8 – Use Dot Notation to access nested fields: For example, fulfillment_days:shipping.days returns the value 3.7 for the first row above.

Feature 9 – Use double colon (::) to specify the desired data type to return for casting value:
For example, fulfillment_days:packing::double returns the double data type value 1.99 for the string value of packing for the first row above.

Extracting values from semi-structured arrays even when the data is ill-formed:

Feature 10 – Extracting Values From Arrays: Use an asterisk (*) to extract all values in a JSON array string. For the specific array indices, use a 0-based value. For example, SQL clicked_items:[*][1]returns the string value of [“54″,”85”].

Casting complex array values: After extracting the correct values for the array of arrays, we can use from_json and ::ARRAY<INT> to cast the array into a format that can be summed using reduce. In the end, the first row returns the summed value of 139 (54 + 89). It’s pretty amazing how easily we can sum values from ill-formed JSON in SQL!

In the SQL query above, we explored how to access and aggregate data from the complex structured data in the column ordered_products. To show the data complexity, below is an example of one row of the column ordered_products, and our goal here is to find the quantity of each product sold on a daily basis. As you can see, both the product and quantity are nested in an array.

Accessing array elements as rows: Use explode on the ordered_products column so that each element is its own row, as seen below.

Accessing nested fields: Use the dot notation to access nested fields in the same manner as semi-structured JSON. For example, ordered_products_explode.qty returns the value 1 for the first row above. We can then group and sum the quantities by date and the product name.

Additional Resources: we have covered many topics on querying structured and semi-structured JSON data, but you can find more information here:

At Databricks, we strive to make the impossible possible and the hard easy. Auto Loader makes ingesting complex JSON use cases at scale easy and possible. The SQL syntax for semi-structured and complex data makes manipulating data easy. Let’s recap the 10 features:

Now that you know how to ingest and query complex JSON with Auto Loader and SQL, we can’t wait to see what you build with them.