A major value Databricks provides is the automatic provisioning, configuration, and tuning of clusters of machines that process data. Running on these machines are the Databricks Runtime artifacts, which include Apache Spark and additional software such as Scala, Python, DBIO, and DBES. For customers these artifacts provide value: they relieve them from the onus of manual scaling; they tighten up security; they boost I/O performance; and they deliver rapid release versions.

In the past, the Runtime was co-versioned with upstream Apache Spark. Today, we are changing to a new version scheme that decouples Databricks Runtime versions from Spark versions and allows us to convey major feature updates in Databricks Runtime clearly to our customers. We are also making the beta of Databricks Runtime 3.0, which is the next major release and includes the latest release candidate build of Apache Spark 2.2, available to all customers today. (Note that Spark 2.2 has not yet officially been released by Apache.)

Customers can select this version when creating a new cluster. 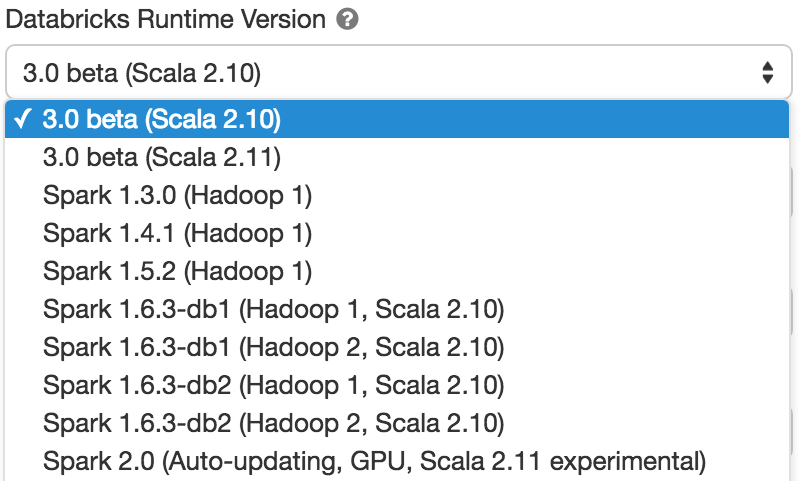 In this blog post, we will explain what Databricks Runtime is, the added value it provides, and preview some of the major updates in the upcoming 3.0 release.

Databricks Runtime is the set of software artifacts that run on the clusters of machines managed by Databricks. It includes Spark but also adds a number of components and updates that substantially improve the usability, performance, and security of big data analytics. The primary differentiations are:

Existing Databricks customers might recognize that Databricks Runtime was called “cluster image” and was co-versioned with Spark before this release, for example, the Spark 2.1 line appeared in the Databricks platform as “2.1.0-db1”, “2.1.0-db2”, “2.1.0-db3”, and “2.1.1-db4”. While Spark is a major component of the runtime, the old co-versioning scheme has labeling limitations. The new version scheme decouples Databricks Runtime versions from Spark versions and allows us to convey major feature updates in Databricks Runtime clearly to our customers.

In effect, Databricks Runtime 3.0 beta includes the release candidate version of Spark 2.2, and all its artifacts, which will be updated automatically as we incorporate bug fixes until it is generally available in June. Next, we will discuss the major features and improvements in this Runtime release.

Databricks Runtime 3.0 includes a number of updates in DBIO that improve performance, data integrity, and security:

Shortly, we will publish a blog showing performance improvements as observed in the TPC-DS benchmarks. To give you a teaser, we compared Databricks Runtime 3.0 and Spark running on EMR, and Databricks is faster on every single query, with a total geomean of 5X improvements on the 99 complex TPC-DS queries. Over 10 queries improved more than 10X in runtime.

A customer tested the latest release and found 4x to 60x improvements on her queries over earlier versions of Spark:

"The performance has been phenomenal! I could almost accuse you of being a random number generator, except the results are correct!"

As part of a new feature in DBES for fine-grained data access control for SQL and the DataFrame APIs, database administrators and data owners can now define access control policies on databases, tables, views, and functions in the catalog to restrict access.

Using standard SQL syntax, access control policies can be defined on views on arbitrary granularity, that is, row level, column level, and aggregate level. This is similar to features available in traditional databases such as Oracle or Microsoft SQL Server, but applies to both SQL and the DataFrame APIs across all supported languages. Even better, it is implemented in a way that does not have any performance penalty and does not require the installation of any additional software.

As an example, the following example grants user rxin permission to access the aggregate salary per department, but not the individual employee’s salary.

In the coming weeks, we will publish a series of blogs and relevant documentation with more details on fine-grained data access control.

Structured Streaming was introduced one year ago to Spark as a new way to build continuous applications. Not only does it simplify building end-to-end streaming applications by exposing a single API to write streaming queries as you would write batch queries, but it also handles streaming complexities by ensuring exactly-once-semantics, doing incremental stateful aggregations and providing data consistency.

The Databricks Runtime 3.0 includes the following new features from Spark 2.2:

In addition to the upstream improvements, Databricks Runtime 3.0 has been optimized specifically for the cloud deployments, including the following enhancements:

Finally, after processing 100s of billions of records in production streams, Databricks is also now considering structured streaming GA and ready for production for our customers.

Improved multi-tenancy: When multiple users run workloads concurrently on the same cluster, Databricks Runtime 3.0 ensures that these users can get fair shares of the resources, so users running short, interactive queries are not blocked by users running large ETL jobs.

Databricks Runtime 3.0 will include Spark 2.2 and more than 1,000 improvements in DBIO, DBES, and Structured Streaming to make data analytics easier, more secure, and more efficient.

While we don’t recommend putting any production workloads on this beta yet, we encourage you to give it a spin. The beta release will be updated automatically daily as we incorporate bug fixes in the upstream open source Apache Spark as well as other components until it is generally available in June.

Sign up for a Databricks trial today to test the full functionality.