Developing custom Machine Learning (ML) algorithms in PySpark—the Python API for Apache Spark—can be challenging and laborious. In this blog post, we describe our work to improve PySpark APIs to simplify the development of custom algorithms. Our key improvement reduces hundreds of lines of boilerplate code for persistence (saving and loading models) to a single line of code. These changes are expected to be available in the next Apache Spark release.

In recent years, Python has become the most popular language for data scientists worldwide, with over a million developers contributing to thousands of open source ML projects. Despite Python’s immense popularity, the developer APIs of Apache Spark MLlib remain Scala-dominated, with all algorithms implemented first in Scala and then made available in Python via wrappers. As a result, it has been very difficult for data scientists to develop ML algorithms in Python without having to write Scala code as well.

Before discussing the specific changes to PySpark, it helps to understand the main APIs for ML algorithms in Spark. There are two major types of algorithms: Transformers and Estimators.

Transformers are algorithms that take an input dataset and modify it via a transform() function to produce an output dataset. For example, Binarizer reads an input column of feature values from a dataset, and it outputs a dataset with a new column of 0/1 features based on thresholding the original features.

Estimators are ML algorithms that take a training dataset, use a fit() function to train an ML model, and output that model. That model is itself a Transformer; for models, calling transform() will “transform” the dataset by adding a new column of predictions. Popular examples of Estimators are Logistic Regression and Random Forests.

Users often combine multiple Transformers and Estimators into a data analytics workflow. ML Pipelines provide an API for chaining algorithms, feeding the output of each algorithm into following algorithms. For more details on these types of algorithms, check out the Databricks docs.

Below, we show a simple Pipeline with 2 feature Transformers (Tokenizer, HashingTF) and 1 Estimator (LogisticRegression) from the MLlib guide on Pipelines.

Let’s say a data scientist wants to extend PySpark to include their own custom Transformer or Estimator. First, the data scientist writes a class that extends either Transformer or Estimator and then implements the corresponding transform() or fit() method in Python. In simple cases, this implementation is straightforward. For example, many feature Transformers can be implemented by using a simple User-Defined Function to add a new column to the input DataFrame.

One critical functionality in MLlib, however, is ML Persistence. Persistence allows users to save models and Pipelines to stable storage, for loading and reusing later or for passing to another team. The API is simple; the following code snippet fits a model using CrossValidator for parameter tuning, saves the fitted model, and loads it back:

Adding support for ML Persistence has traditionally required a Scala implementation. Up until now, the simplest way to implement persistence required the data scientist to implement the algorithm in Scala and write a Python wrapper. Implementing the algorithm in Scala would require knowing both languages, understanding the Java—Python communication interface, and writing duplicate APIs in the two languages.

For simple algorithms for which all of the parameters are JSON-serializable (simple types like string, float), the algorithm class can extend the classes DefaultParamsReadable and DefaultParamsWritable (SPARK-21542; code on Github) to enable automatic persistence. (If you are unfamiliar with Params in ML Pipelines, they are standardized ways to specify algorithm options or properties. Refer to the Param section of the MLlib guide for more info.) The default implementation of persistence will allow the custom algorithm to be saved and loaded back within PySpark.

These mixins dramatically reduce the development effort required to create custom ML algorithms on top of PySpark. Persistence functionality that used to take many lines of extra code can now be done in a single line in many cases.

The code snippets below demonstrate the code length of persisting an algorithm with a Scala implementation and a Python wrapper:

And this code snippet demonstrates using these mixins for a Python-only implementation of persistence:

Adding the mixins DefaultParamsReadable and DefaultParamsWritable to the MyShiftTransformer class allows us to eliminate a lot of code.

For complex algorithms with parameters or data which are not JSON-serializable (complex types like DataFrame), the developer can write custom save() and load() methods in Python. Previously, even with save() and load() implemented, custom Python implementations could not be saved within ML Pipelines. Our fixes (SPARK-17025) correct this issue, allowing smooth integration of custom Python algorithms with the rest of MLlib.

With these improvements, developers will soon be able to write custom machine learning algorithms in Python, use them in Pipelines, and save and load them without touching Scala. We believe this will unblock many developers and encourage further efforts to develop Python-centric Spark Packages for machine learning. 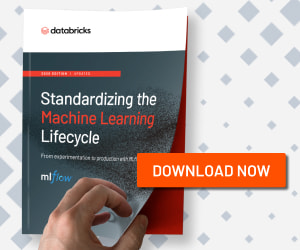 Learn how to standardize the machine learning lifecycle.
DOWNLOAD NOW