Update Dec 14, 2017: As a result of a fix in the toolkit’s data generator, Apache Flink’s performance on a cluster of 10 nodes, multiple core cluster went from 6x slower than Apache Spark to 3x. This configuration is not examined in Apache Flink’s post. In most uses cases, you will want to run streaming applications in a clustered environment, not on a single machine. Also, the images have been updated to reflect these changes.

Benchmarking is a crucial and common process for evaluating the performance of systems. What makes a benchmark credible is its reproducibility. Many existing benchmarks are hard to reproduce for a couple reasons:

At Databricks, we used Databricks Notebooks and cluster management to set up a reproducible benchmarking harness that compares the performance of Apache Spark’s Structured Streaming, running on Databricks Unified Analytics Platform, against other open source streaming systems such as Apache Kafka Streams and Apache Flink. In particular, we used the following systems and versions in our benchmarks:

The Yahoo Streaming Benchmark is a well-known benchmark used in industry to evaluate streaming systems. When setting up our benchmark, we wanted to push each streaming system to its absolute limits, yet keep the business logic the same as in the Yahoo Streaming Benchmark. We shared some of the results we achieved from these benchmarks during Spark Summit West 2017 keynote showing that Spark can reach 4x or higher throughput over other popular streaming systems. In this blog, we discuss in more detail about how we performed this benchmark, and how you can reproduce the results yourselves.

With only a couple of clicks and commands, you can run all these systems side-by-side in Databricks Community Edition. All you need to do is:

If you have a Databricks Enterprise subscription, you may run the benchmark at scale using the additional set of configurations that have been commented out in the Main notebook.

The original Yahoo Benchmark emulates a simple advertisement application. A stream of ad events is consumed from Kafka. The goal is to compute event-time windowed counts of ad campaigns that are “viewed.” Specifically, the order of operations is:

We wanted to make sure that the system we were benchmarking was the bottleneck, and not some interaction with an external service; therefore, we made the following changes, as was done in the benchmark published by data Artisans on Flink: 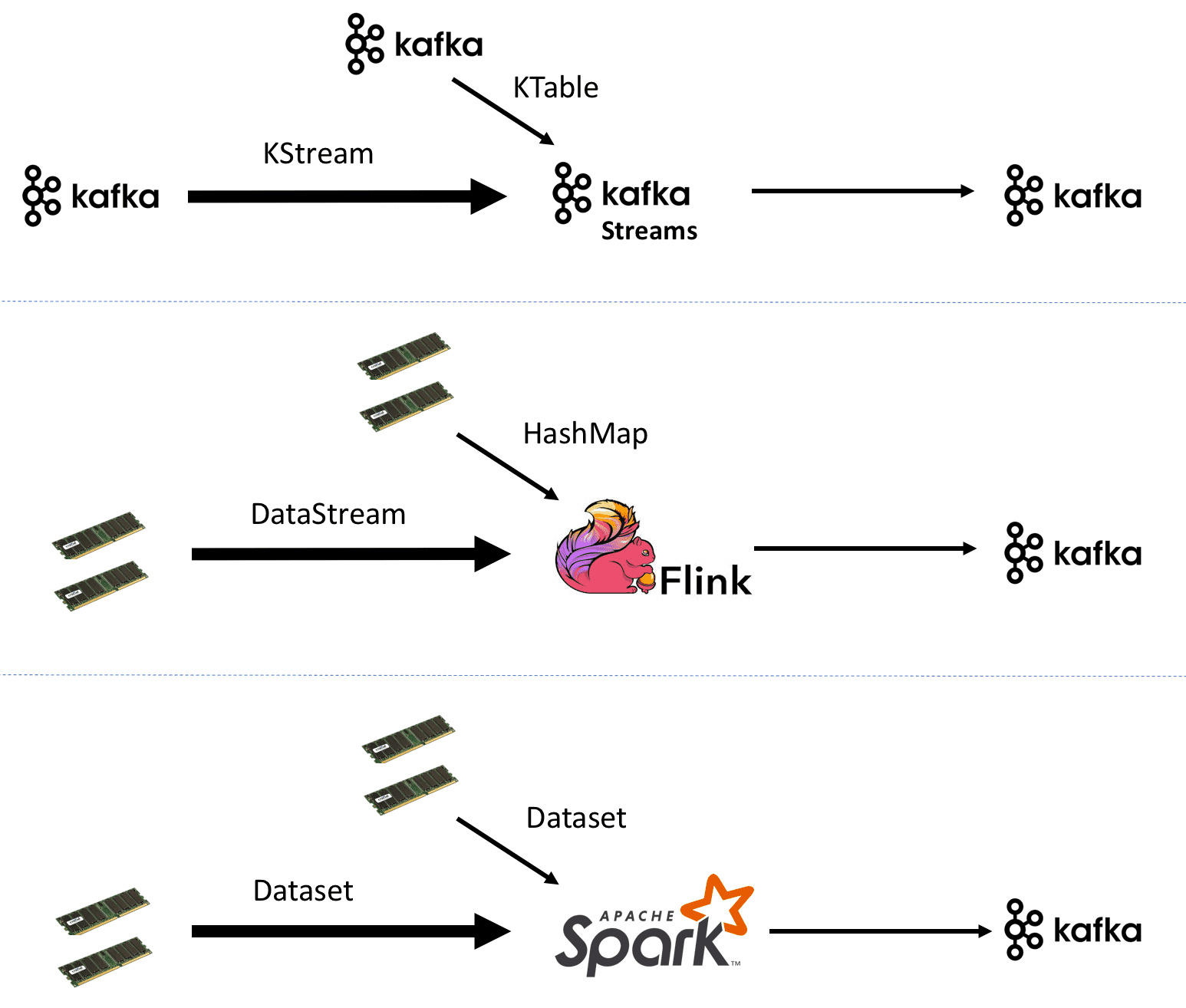 Automating throughput calculation was a bit trickier. The method we used is as follows:

We tried to replicate the performance results for Flink of 15 M records/s published in this blog post. We were able to achieve numbers around 16 M records/s on Databricks using commodity cloud hardware (c3.2xlarge instances on AWS). However, we noticed that we could achieve the 16 M records/s throughput with Flink when we generated a single ad per campaign and not ten ads per campaign. Changing how many ads there were per campaign did not affect Spark or Kafka Streams’ performance but caused an order of magnitude drop in Flink’s throughput.

With the final benchmark setup, which we ran on Databricks Community Edition, we observed that Spark had 1.5 times more throughput than Flink: 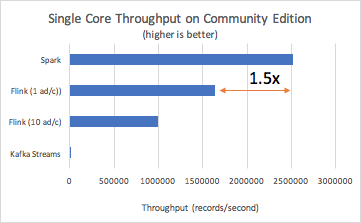 Once we ran the benchmark at scale (10 worker nodes) for each system, we observed the following results: 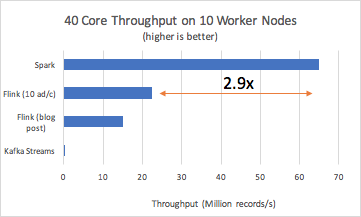 To recap, we ran the Yahoo Streaming Benchmarks to compare Apache Spark’s Structured Streaming on Databricks Runtime against the other open-source streaming engines: Apache Flink and Apache Kafka Streams. Our results show that Spark can reach 2.9x or higher throughput. In the spirit of reproducible experiments and methodology, we have published all the scripts for you to reproduce these benchmarks.

We look forward to hearing your feedback! Please submit them as issues to our benchmark GitHub repository