This blog will show how to utilize XGBoost and Spark from Databricks notebooks and the setup steps necessary to take advantage of NVIDIA GPUs to significantly reduce training time and cost. We illustrate the benefits of GPU-acceleration with a real-world use case from NVIDIA’s GeForce NOW team and show you how to enable it in your own notebooks.

XGBoost is an open source library that provides a gradient boosting framework usable from many programming languages (Python, Java, R, Scala, C++ and more). XGBoost can run on a single machine or on multiple machines under several different distributed processing frameworks (Apache Hadoop, Apache Spark, Apache Flink). XGBoost models can be trained on both CPUs and GPUs. However, data scientists on the GeForce NOW team run into significant challenges with cost and training time when using CPU-based XGBoost.

As network traffic varies dramatically over the course of a day, the prediction model needs to be re-trained frequently with the latest GeForce NOW data. Given a myriad of features and large datasets, NVIDIA GeForce NOW data scientists rely upon hyperparameter searches to build highly accurate models. For a dataset of tens of million rows and a non-trivial number of features, CPU model training with Hyperopt takes more than 20 hours on a single AWS r5.4xlarge CPU instance. Even with a scale-out approach using 2 CPU server instances, the training latency requires 6 hours with spiraling infrastructure costs.

A recent NVIDIA developer blog illustrated the significant benefits of GPU-accelerated XGBoost model training. NVIDIA data scientists followed a similar approach to achieve a 22x speed-up and 8x cost savings compared to CPU-based XGBoost. As illustrated in Figure 1, a GeForce NOW production network traffic data dataset with 40 million rows and 32 features took only 18 minutes on GPU for training when compared to 3.2 hours (191 minutes) on CPU. In addition, the right hand side of Figure 1 compares CPU cluster costs and GPU cluster costs that include both AWS instances and Databricks runtime costs. 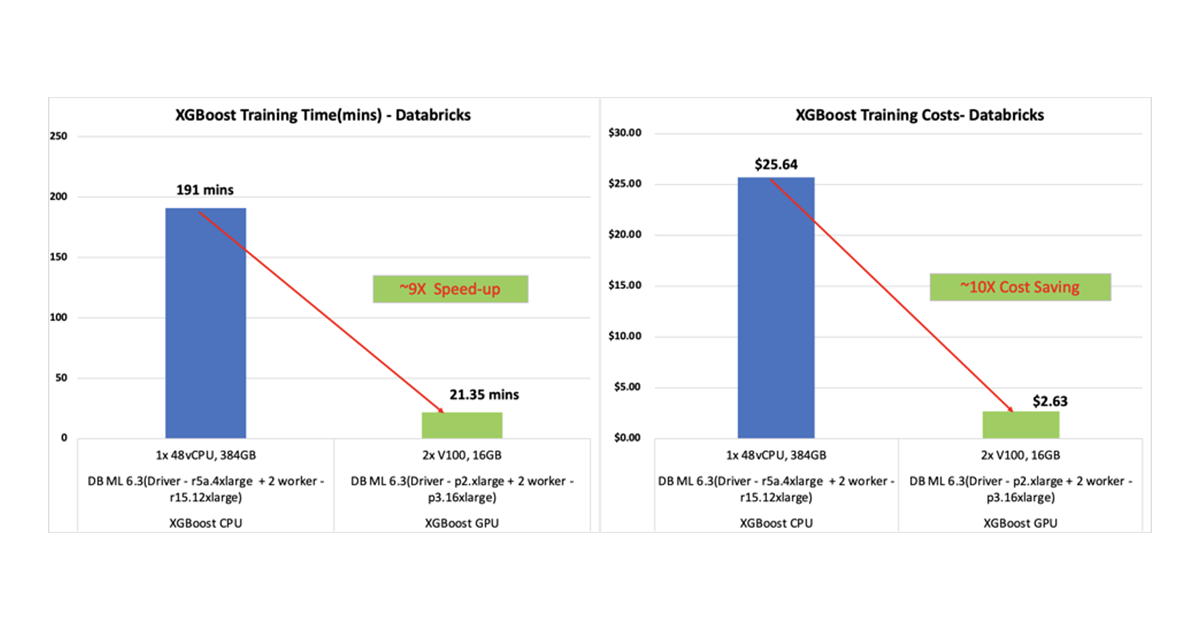 As for model performance, the trained XGBoost models were compared on four different metrics.

The NVIDIA GPU-based XGBoost model has similar accuracy in all these metrics.

Now that we have seen the performance and cost savings, next we will discuss the setup and best practices to run a sample XGBoost notebook on a Databricks GPU cluster.

To run XGBoost on GPU, you only need to make the following adjustments:

To conduct NVIDIA GPU-based XGBoost training, you need to set up your Spark cluster with GPUs and the proper Databricks ML runtime.

After starting the cluster, in your XGBoost notebook you need to change the treemethod parameter from hist to gpu_hist.

Getting Started with GPU Model Training

You can find the GeForce NOW PySpark notebook hosted on GitHub. The notebook uses hyperopt for hyperparameter search and DBFS's local file interface to load onto worker nodes.