It has been a little more than a year since Delta Lake became an open-source project as a Linux Foundation project.  While a lot has changed over the last year, the challenges for most data lakes remain stubbornly the same - the inherent unreliability of data lakes.  To address this, Delta Lake brings reliability and data quality for data lakes and Apache Spark; learn more by watching Michael Armbrust’s session at Big Things Conference. 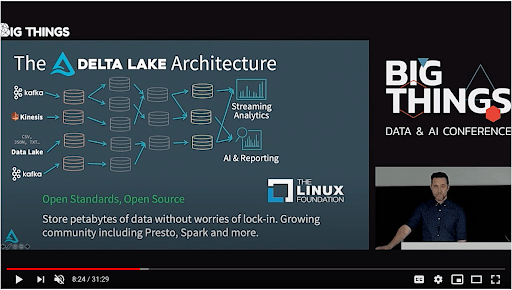 With Delta Lake, you can simplify and scale your data engineering pipelines and improve your data quality data flow with the Delta Architecture.

To provide more details, the following section provides an overview of the features of Delta Lake.  Included are links to various blogs and tech talks that dive into the technical aspects including the Dive into Delta Lake Internals Series of tech talks.

The Delta Architecture with the medallion data quality data flow

Building upon the Apache Spark Foundation

Checkpoints from the last year

In April 2019, we announced that Delta Lake would be open-sourced with the Linux Foundation; the source code for the project can be found at https://github.com/delta-io/delta.  In that time span, the project has quickly progressed with releases (6 so far), contributors (65 so far), and stars (>2500).  At this time, we wanted to call out some of the cool features.

With Delta Lake 0.3.0, you now have the ability to run DELETE, UPDATE, and MERGE statements using the Spark API.  Instead of running a convoluted mix of INSERTs, file-level deletions, and table removals and re-creations, you can execute DML statements within a single atomic transaction.

The returned DataFrame will have the following structure.

Support for other processing engines

An important fundamental of Delta Lake was that while it is a storage layer originally conceived to work with Apache Spark, it can work with many other processing engines.  As part of the Delta Lake 0.5.0 release, we included the ability to create manifest files so that you can query Delta Lake tables from Presto and Amazon Athena.

The blog post Query Delta Lake Tables from Presto and Athena, Improved Operations Concurrency, and Merge performance provides examples of how to create the manifest file to query Delta Lake from Presto; for more information, refer to Presto and Athena to Delta Lake Integration.  Included as part of the same release was the experimental support for Snowflake and Redshift Spectrum. More recently, we’d like to call out integrations with dbt and koalas. 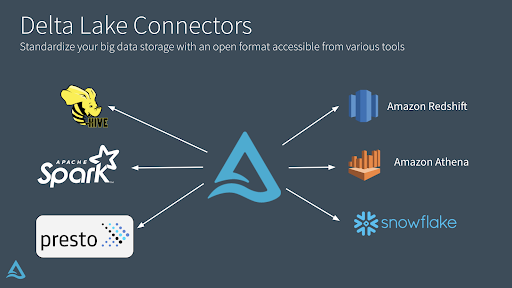 With Delta Connector 0.1.0, your Apache Hive environment can now read Delta Lake tables.  With this connector, you can create a table in Apache Hive using STORED BY syntax to point it to an existing Delta table like this:

As your data lakes grow in size and complexity, it becomes increasingly difficult to maintain it.  But with Delta Lake, each release included more features to simplify the operational overhead.  For example, Delta Lake 0.5.0 includes improvements in concurrency control and support for file compaction.  Delta Lake 0.6.0 made further improvements including support for reading Delta tables from any file system and improved merge performance and automatic repartitioning.

you can run a single atomic operation to update values as well as merge together the new schema with the following example statement.

Improvements to operational metrics were also included in the release so that you can review them from both the API and the Spark UI.  For example, running the statement:

provides the abbreviated output of the modifications that had happened to your table.

For the same action, you can view this information directly within the Spark UI as visualized in the following animated GIF.

For more details surrounding this action, refer to Schema Evolution in Merge Operations and Operational Metrics in Delta Lake.

While the preceding section has been about our recent past, let’s get back to the future and focus on the enhancements coming with Spark 3.0.

Delta tables can be referenced in an external catalog such as the HiveMetaStore with Delta Lake 0.7.0. Look out for Delta Lake 0.7.0 release working with Spark 3.0 in the coming weeks.

Delta tables can be created by specifying columns as NOT NULL. This will prevent any rows containing null values for those columns from being written to your tables.

More support is on the way, for example the definition of arbitrary SQL expressions as invariants as well as being able to define these invariants on existing tables.

Get Started with Delta Lake

Try out Delta Lake with the preceding code snippets on your Apache Spark 2.4.5 (or greater) instance (on Databricks, try this with DBR 6.6+). Delta Lake makes your data lakes more reliable (whether you create a new one or migrate an existing data lake).  To learn more, refer to https://delta.io/, and join the Delta Lake community via Slack and Google Group.  You can track all the upcoming releases and planned features in GitHub milestones. You can also try out Managed Delta Lake on Databricks with a free account.