Notebooks are a popular way to start working with data quickly without configuring a complicated environment. Notebook authors can quickly go from interactive analysis to sharing a collaborative workflow, mixing explanatory text with code. Often, notebooks that begin as exploration evolve into production artifacts. For example,

Perhaps surprisingly, many Databricks customers find that with small adjustments, notebooks can be packaged into production assets, and integrated with best practices such as code review, testing, modularity, continuous integration, and versioned deployment.

To Re-Write, or Productionize?

After completing exploratory analysis, conventional wisdom is to re-write notebook code in a separate, structured codebase, using a traditional IDE. After all, a production codebase can be integrated with CI systems, build tools, and unit testing infrastructure. This approach works best when data is mostly static and you do not expect major changes over time. However, the more common case is that your production asset needs to be modified, debugged, or extended frequently in response to changing data. This often entails exploration back in a notebook. Better still would be to skip the back-and-forth.

“But notebooks aren’t well suited to testing, modularity, and CI!” – you might say. Not so fast! In this article, we outline how to incorporate such software engineering best practices with Databricks Notebooks. We’ll show you how to work with version control, modularize code, apply unit and integration tests, and implement continuous integration / continuous delivery (CI/CD). We’ll also provide a demonstration through an example repo and walkthrough. With modest effort, exploratory notebooks can be adjusted into production artifacts without rewrites, accelerating debugging and deployment of data-driven software.

A cornerstone of production engineering is to have a robust version control and code review process. In order to manage the process of updating, releasing, or rolling back changes to code over time, Databricks Repos makes integrating with many of the most popular Git providers simple. It also provides a clean UI to perform typical Git operations like commit, pull, and merge. An existing notebook, along with any accessory code (like python utilities), can easily be added to a Databricks repo for source control integration.

Having integrated version control means you can collaborate with other developers through Git, all within the Databricks workspace. For programmatic access, the Databricks Repos API allows you to integrate Repos into your automated pipelines, so you’re never locked into only using a UI.

When a project moves past its early prototype stage, it is time to refactor the code into modules that are easier to share, test, and maintain. With support for arbitrary files and a new File Editor, Databricks Repos enable the development of modular, testable code alongside notebooks. In Python projects, modules defined in .py files can be directly imported into the Databricks Notebook:

Developers can also use the %autoreload magic command to ensure that any updates to modules in .py files are immediately available in Databricks Notebooks, creating a tighter development loop on Databricks. For R scripts in Databricks Repos, the latest changes can be loaded into a notebook using the source() function.

Code that is factored into separate Python or R modules can also be edited offline in your favorite IDE. This is particularly useful when cosebases become larger.

Databricks Repos encourages collaboration through the development of shared modules and libraries instead of a brittle process involving copying code between notebooks.

When collaborating with other developers, how do you ensure that changes to code work as expected? This is achieved through testing each independent unit of logic in your code (unit tests), as well as the entire workflow with its chain of dependencies (integration tests). Failures of these types of test suites can be used to catch problems in the code before they affect other developers or jobs running in production.

To unit test notebooks using Databricks, we can leverage typical Python testing frameworks like pytest to write tests in a Python file. Here is a simple example of unit tests with mock datasets for a basic ETL workflow: 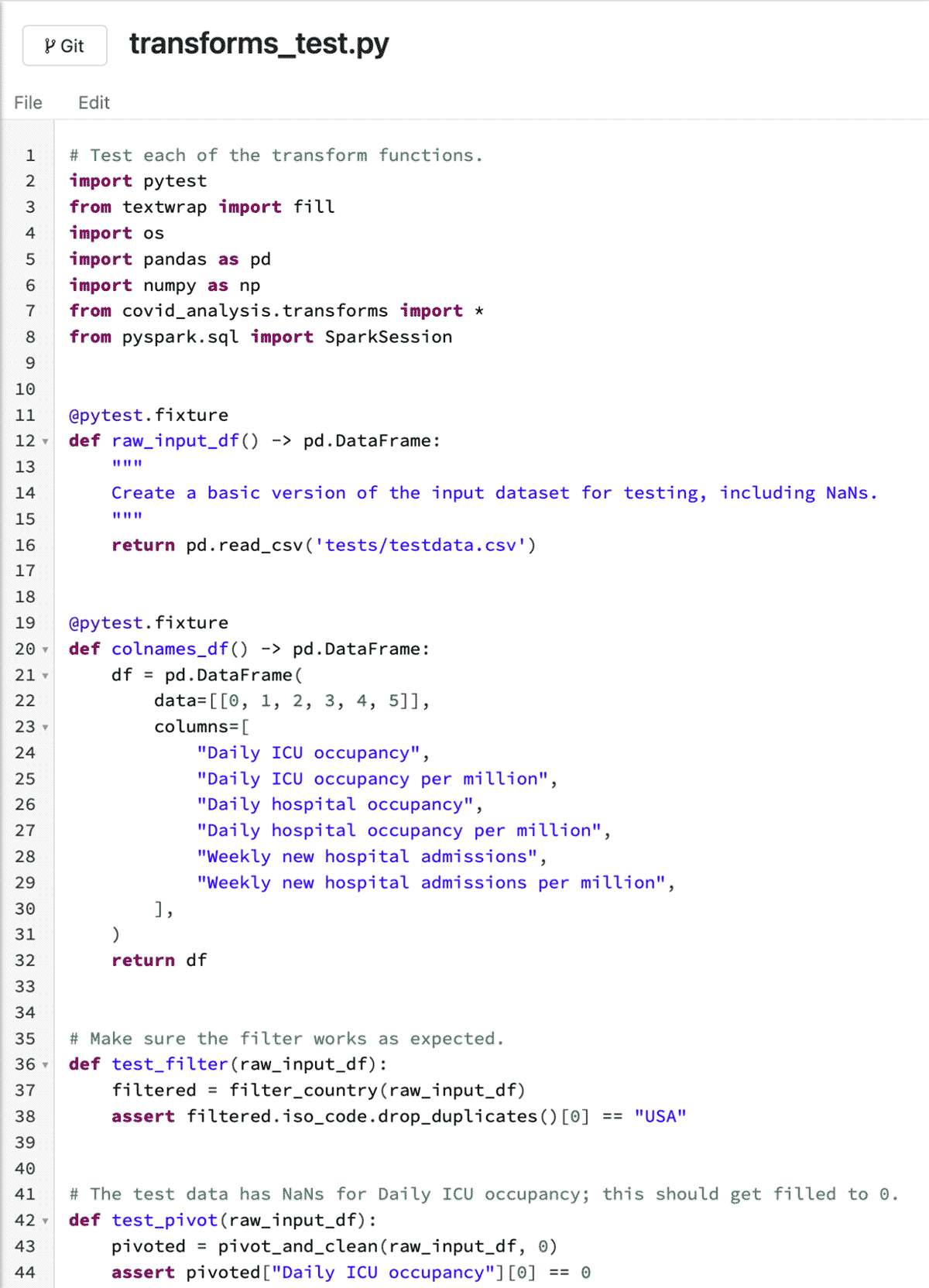 We can invoke these tests interactively from a Databricks Notebook (or the Databricks web terminal) and check for any failures: 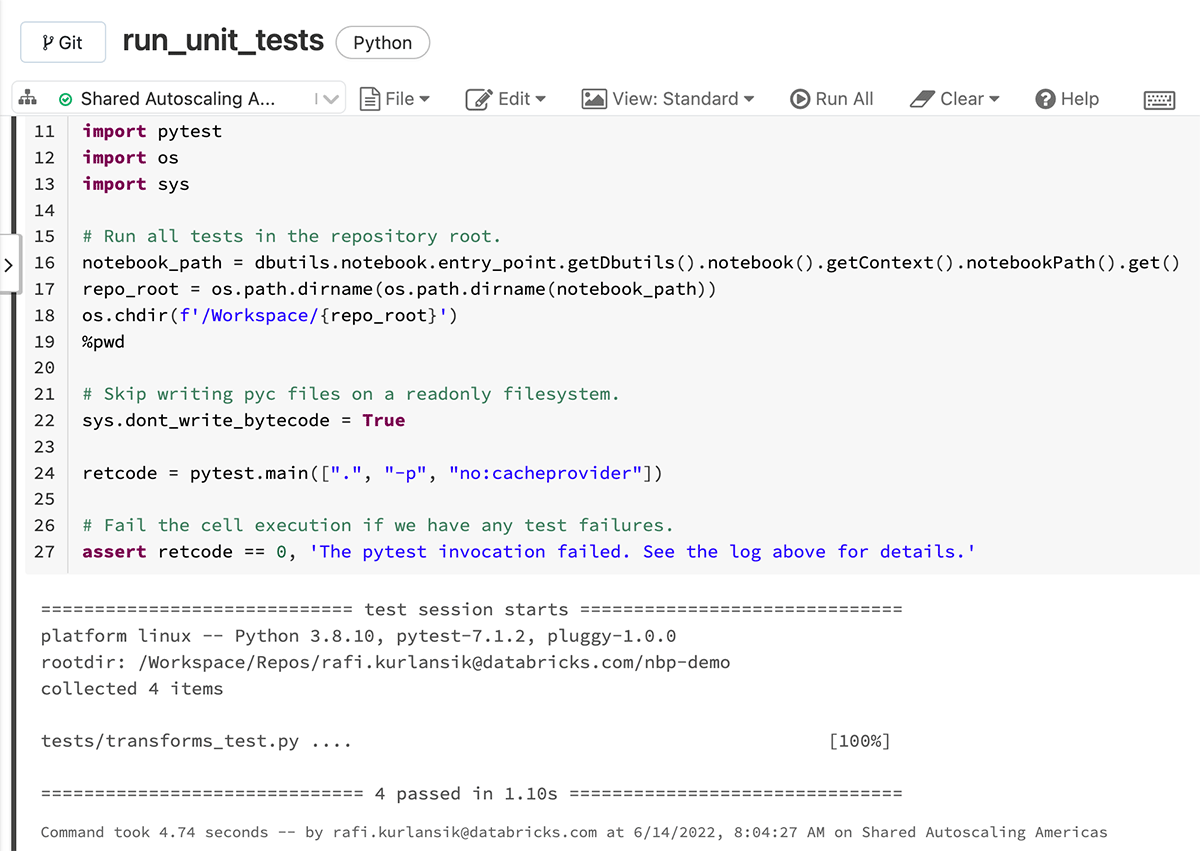 When testing our entire notebook, we want to execute without affecting production data or other assets – in other words, a dry run. One simple way to control this behavior is to structure the notebook to only run as production when specific parameters are passed to it. On Databricks, we can parameterize notebooks with Databricks widgets:

The same results can be achieved by running integration tests in workspaces that don’t have access to production assets. Either way, Databricks supports both unit and integration tests, setting your project up for success as your notebooks evolve and the effects of changes become cumbersome to check by hand.

To catch errors early and often, a best practice is for developers to frequently commit code back to the main branch of their repository. There, popular CI/CD platforms like GitHub Actions and Azure DevOps Pipelines make it easy to run tests against these changes before a pull request is merged. To better support this standard practice, Databricks has released two new GitHub Actions: run-notebook to trigger the run of a Databricks Notebook, and upload-dbfs-temp to move build artifacts like Python .whl files to DBFS where they can be installed on clusters. These actions can be combined into flexible multi-step processes to accommodate the CI/CD strategy of your organization. 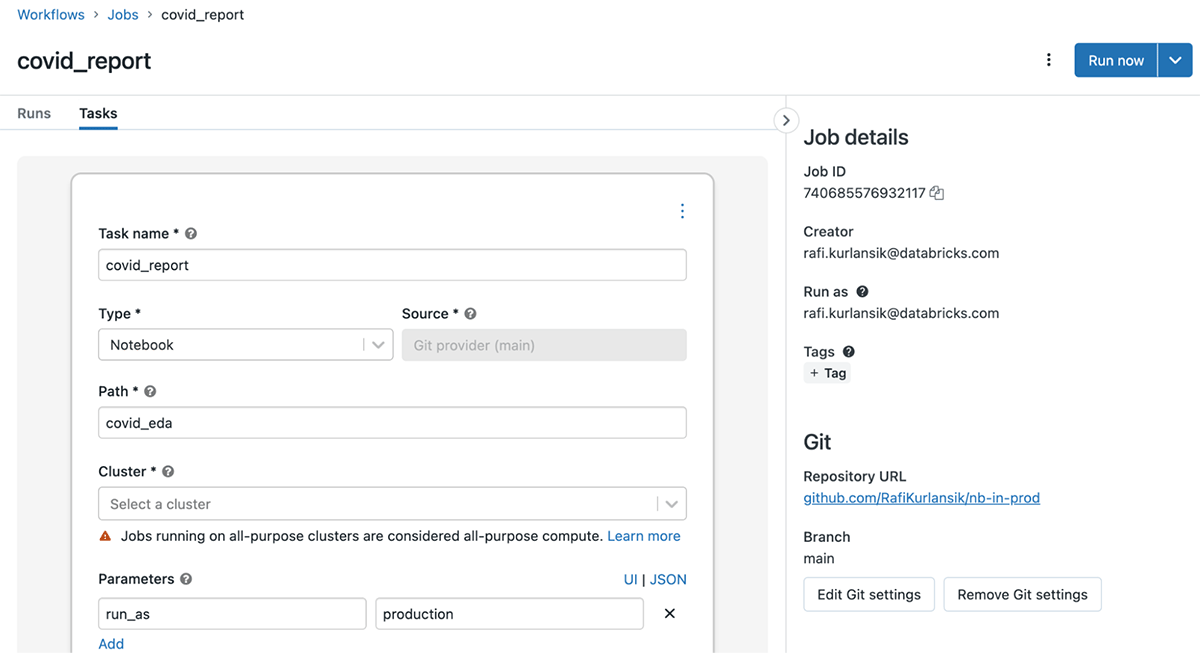 In this post we have introduced concepts that can elevate your use of the Databricks Notebook by applying software engineering best practices. We covered version control, modularizing code, testing, and CI/CD on the Databricks Lakehouse platform. To learn more about these topics, be sure to check out the example repo and accompanying walkthrough.

March 10, 2022 by Anindita Mahapatra Greg Wood  in Best Practices
Introduction This blog is part one of our Admin Essentials series, where we’ll focus on topics that are important to those managing and…

October 29, 2020 by Jules Damji  in Engineering Blog
Often, small things make a huge difference, hence the adage that “some of the best ideas are simple!” Over the course of a… 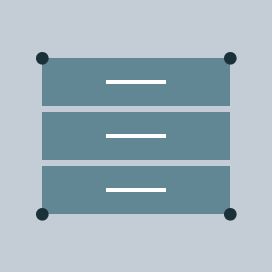 December 7, 2021 by Edward Gan Moonsoo Lee Austin Ford  in Platform Blog
Before a data scientist can write a report on analytics or train a machine learning (ML) model, they need to understand the shape…
See all Product posts