What are Window Functions?

While these are both very useful in practice, there is still a wide range of operations that cannot be expressed using these types of functions alone. Specifically, there was no way to both operate on a group of rows while still returning a single value for every input row. This limitation makes it hard to conduct various data processing tasks like calculating a moving average, calculating a cumulative sum, or accessing the values of a row appearing before the current row. Fortunately for users of Spark SQL, window functions fill this gap.

At its core, a window function calculates a return value for every input row of a table based on a group of rows, called the Frame. Every input row can have a unique frame associated with it. This characteristic of window functions makes them more powerful than other functions and allows users to express various data processing tasks that are hard (if not impossible) to be expressed without window functions in a concise way. Now, let’s take a look at two examples.

Suppose that we have a productRevenue table as shown below. 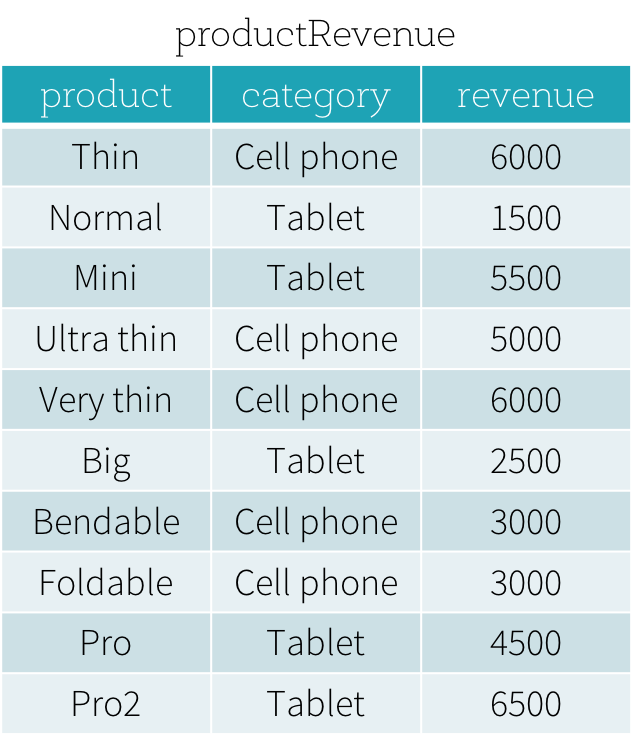 We want to answer two questions:

In the DataFrame API, we provide utility functions to define a window specification. Taking Python as an example, users can specify partitioning expressions and ordering expressions as follows.

There are five types of boundaries, which are UNBOUNDED PRECEDING, UNBOUNDED FOLLOWING, CURRENT ROW, , and . UNBOUNDED PRECEDING and UNBOUNDED FOLLOWING represent the first row of the partition and the last row of the partition, respectively. For the other three types of boundaries, they specify the offset from the position of the current input row and their specific meanings are defined based on the type of the frame. There are two types of frames, ROW frame and RANGE frame.

Now, let’s take a look at an example. In this example, the ordering expressions is revenue; the start boundary is 2000 PRECEDING; and the end boundary is 1000 FOLLOWING (this frame is defined as RANGE BETWEEN 2000 PRECEDING AND 1000 FOLLOWING in the SQL syntax). The following five figures illustrate how the frame is updated with the update of the current input row. Basically, for every current input row, based on the value of revenue, we calculate the revenue range [current revenue value - 2000, current revenue value + 1000]. All rows whose revenue values fall in this range are in the frame of the current input row.

In summary, to define a window specification, users can use the following syntax in SQL.

OVER (PARTITION BY ... ORDER BY ... frame_type BETWEEN start AND end)

In the Python DataFrame API, users can define a window specification as follows.

Since the release of Spark 1.4, we have been actively working with community members on optimizations that improve the performance and reduce the memory consumption of the operator evaluating window functions. Some of these will be added in Spark 1.5, and others will be added in our future releases. Besides performance improvement work, there are two features that we will add in the near future to make window function support in Spark SQL even more powerful. First, we have been working on adding Interval data type support for Date and Timestamp data types (SPARK-8943). With the Interval data type, users can use intervals as values specified in and for RANGE frame, which makes it much easier to do various time series analysis with window functions. Second, we have been working on adding the support for user-defined aggregate functions in Spark SQL (SPARK-3947). With our window function support, users can immediately use their user-defined aggregate functions as window functions to conduct various advanced data analysis tasks.

To try out these Spark features, get a free trial of Databricks or use the Community Edition.

The development of the window function support in Spark 1.4 is is a joint work by many members of the Spark community. In particular, we would like to thank Wei Guo for contributing the initial patch.