When our team at Databricks planned our contributions to the upcoming Apache Spark 2.0 release, we set out with an ambitious goal by asking ourselves: Apache Spark is already pretty fast, but can we make it 10x faster?

This question led us to fundamentally rethink the way we built Spark’s physical execution layer. When you look into a modern data engine (e.g. Spark or other MPP databases), a majority of the CPU cycles are spent in useless work, such as making virtual function calls or reading or writing intermediate data to CPU cache or memory. Optimizing performance by reducing the amount of CPU cycles wasted in this useless work has been a long-time focus of modern compilers.

The Past: Volcano Iterator Model

Before we dive into the details of whole-stage code generation, let us revisit how Spark (and most database systems) work currently. Let us illustrate this with a simple query that scans a single table and counts the number of elements with a given attribute value: 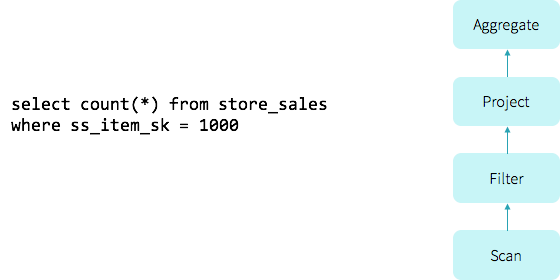 To evaluate this query, older versions (1.x) of Spark leveraged a popular classic query evaluation strategy based on an iterator model (commonly referred to as the Volcano model). In this model, a query consists of multiple operators, and each operator presents an interface, next(), that returns a tuple at a time to the next operator in the tree. For instance, the Filter operator in the above query roughly translates into the code below:

Having each operator implement an iterator interface allowed query execution engines to elegantly compose arbitrary combinations of operators without having to worry about what opaque data type each operator provides. As a result, the Volcano model became the standard for database systems in the last two decades, and is also the architecture used in Spark.

To digress a little, what if we ask a college freshman and give her 10 minutes to implement the above query in Java? It’s quite likely she’d come up with iterative code that loops over the input, evaluates the predicate and counts the rows:

The above code was written specifically to answer a given query, and is obviously not “composable.” But how would the two—Volcano generated and hand-written code—compare in performance? On one side, we have the architecture chosen for composability by Spark and majority of the database systems. On the other, we have a simple program written by a novice in 10 minutes. We ran a simple benchmark that compared the “college freshman” version of the program and a Spark program executing the above query using a single thread against Parquet data on disk:

As you can see, the “college freshman” hand-written version is an order of magnitude faster than the Volcano model. It turns out that the 6 lines of Java code are optimized, for the following reasons:

The key take-away here is that the hand-written code is written specifically to run that query and nothing else, and as a result it can take advantage of all the information that is known, leading to optimized code that eliminates virtual function dispatches, keeps intermediate data in CPU registers, and can be optimized by the underlying hardware.

From the above observation, a natural next step for us was to explore the possibility of automatically generating this handwritten code at runtime, which we are calling “whole-stage code generation.” This idea is inspired by Thomas Neumann’s seminal VLDB 2011 paper on Efficiently Compiling Efficient Query Plans for Modern Hardware. For more details on the paper, Adrian Colyer has coordinated with us to publish a review on The Morning Paper blog today.

The goal is to leverage whole-stage code generation so the engine can achieve the performance of hand-written code, yet provide the functionality of a general purpose engine. Rather than relying on operators for processing data at runtime, these operators together generate code at runtime and collapse each fragment of the query, where possible, into a single function and execute that generated code instead.

For instance, in the query above, the entire query is a single stage, and Spark would generate the the following JVM bytecode (in the form of Java code illustrated here). More complicated queries would result in multiple stages and thus multiple different functions generated by Spark.

Those of you that have been following Spark’s development closely might ask the following question: “I’ve heard about code generation since Apache Spark 1.1 in this blog post. How is it different this time?” In the past, similar to other MPP query engines, Spark only applied code generation to expression evaluation and was limited to a small number of operators (e.g. Project, Filter). That is, code generation in the past only sped up the evaluation of expressions such as “1 + a”, whereas today whole-stage code generation actually generates code for the entire query plan.

Whole-stage code-generation techniques work particularly well for a large spectrum of queries that perform simple, predictable operations over large datasets. There are, however, cases where it is infeasible to generate code to fuse the entire query into a single function. Operations might be too complex (e.g. CSV parsing or Parquet decoding), or there might be cases when we’re integrating with third party components that can’t integrate their code into our generated code (examples can range from calling out to Python/R to offloading computation to the GPU).

To improve performance in these cases, we employ another technique called “vectorization.” The idea here is that instead of processing data one row at a time, the engine batches multiples rows together in a columnar format, and each operator uses simple loops to iterate over data within a batch. Each next() call would thus return a batch of tuples, amortizing the cost of virtual function dispatches. These simple loops would also enable compilers and CPUs to execute more efficiently with the benefits mentioned earlier.

As an example, for a table with three columns (id, name, score), the following illustrates the memory layout in row-oriented format and column-oriented format.

This style of processing, invented by columnar database systems such as MonetDB and C-Store, would achieve two of the three points mentioned earlier (almost no virtual function dispatches and automatic loop unrolling/SIMD). It, however, still requires putting intermediate data in-memory rather than keeping them in CPU registers. As a result, we use vectorization only when it is not possible to do whole-stage code generation.

For example, we have implemented a new vectorized Parquet reader that does decompression and decoding in column batches. When decoding integer columns (on disk), this new reader is roughly 9 times faster than the non-vectorized one:

In the future, we plan to use vectorization in more code paths such as UDF support in Python/R.

We have measured the amount of time (in nanoseconds) it would take to process a tuple on one core for some of the operators in Apache Spark 1.6 vs. Apache Spark 2.0, and the table below is a comparison that demonstrates the power of the new Tungsten engine. Spark 1.6 includes expression code generation technique that is also in use in some state-of-the-art commercial databases today.

We have surveyed our customers’ workloads and implemented whole-stage code generation for the most frequently used operators, such as filter, aggregate, and hash joins. As you can see, many of the core operators are an order of magnitude faster with whole-stage code generation. Some operators such as sort-merge join, however, are inherently slower and more difficult to optimize.

It takes less than one second to perform the hash join operation on 1 billion tuples on both the Databricks platform (with Intel Haswell processor 3 cores) as well as on a 2013 Macbook Pro (with mobile Intel Haswell i7).

How does this new engine work on end-to-end queries? Beyond whole-stage code generation and vectorization, a lot of work has also gone into improving the Catalyst optimizer for general query optimizations such as nullability propagation. We did some preliminary analysis using TPC-DS queries to compare Spark 1.6 and the upcoming Spark 2.0: 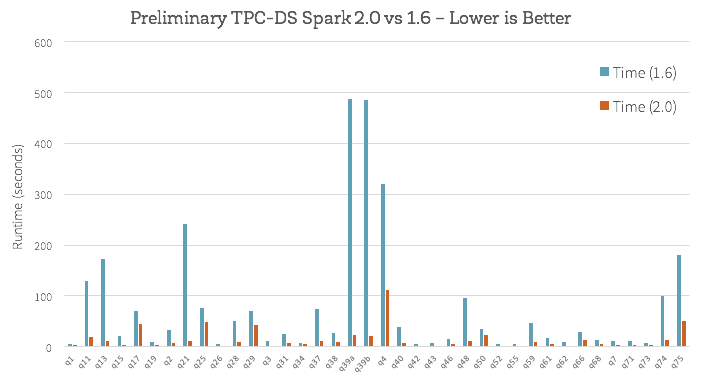 Does this mean your workload will magically become ten times faster once you upgrade to Spark 2.0? Not necessarily. While we believe the new Tungsten engine implements the best architecture for performance engineering in data processing, it is important to understand that not all workloads can benefit to the same degree. For example, variable-length data types such as strings are naturally more expensive to operate on, and some workloads are bounded by other factors ranging from I/O throughput to metadata operations. Workloads that were previously bounded by CPU efficiency would observe the largest gains, and shift towards more I/O bound, whereas workloads that were previously I/O bound are less likely to observe gains.

To recap, this blog post described the second generation Tungsten execution engine. Through a technique called whole-stage code generation, the engine will (1) eliminate virtual function dispatches (2) move intermediate data from memory to CPU registers and (3) exploit modern CPU features through loop unrolling and SIMD. Through a technique called vectorization, the engine will also speed up operations that are too complex for code generation. For many core operators in data processing, the new engine is orders of magnitude faster. In the future, given the efficiency of the execution engine, bulk of our performance work will shift towards optimizing I/O efficiency and better query planning.

We are excited about the progress made, and hope you will enjoy the improvements. To try some of these out for free, sign up for an account on Databricks Community Edition.

Apache Spark as a Compiler: Joining a Billion Rows per Second on a Laptop

May 23, 2016 by Sameer Agarwal, Davies Liu and Reynold Xin in Engineering Blog
When our team at Databricks planned our contributions to the upcoming Apache Spark 2.0 release, we set out with an ambitious goal by...
See all Engineering Blog posts