Spark Summit 2016 will be held in San Francisco on June 6–8. Check out the full agenda and get your ticket

This is part 3 of the 3 part series Genome Variant Analysis using K-Means, ADAM, and Apache Spark:

In this three-part blog, we will provide a primer of genome sequencing and its potential.  We will focus on genome variant analysis - that is the differences between genome sequences - and how it can be accelerated by making use of Apache Spark and ADAM (a scalable API and CLI for genome processing) using Databricks Community Edition.  Finally, we will execute a k-means clustering algorithm on genomic variant data and build a model that will predict the individual’s geographic population of origin  based on those variants.

This post will focus on predicting geographic population using genome variants and k-means.  You can also review the refresher Genome Sequencing in a Nutshell or more details behind Parallelizing Genome Variant Analysis.

We will be demonstrating Genome Variant Analysis by performing K-Means on ADAM data using Apache Spark on Databricks Community Edition.  The notebook shows how to perform an analysis of public data from the 1000 genomes project using the Big Data Genomics ADAM Project (0.19.0 Release). We attempt k-means clustering to predict which geographic population each person is from and visualize the results.

As with most Data Sciences projects, there are a number of preparation tasks that must be completed first.  In this example, we will showcase from our example notebook:

To create an ADAM parquet file from VCF, we will first load the VCF file using the ADAM’s SparkContext loadGenotypes method.  By using the adamParquetSave method, we save the VCF in ADAM parquet format.

While the VCF data contain sample IDs, they do not contain population codes that we will want to predict.  Although we are doing an unsupervised algorithm in this analysis, we still need the response variables in order to filter our samples and to estimate our prediction error. We can get the population codes for each sample from the integrated_call_samples_v3.20130502.ALL.panel panel file from the 1000 genomes project. 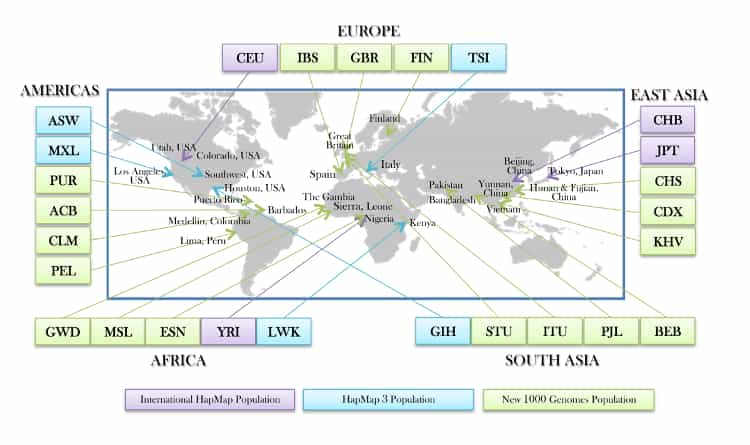 The code snippet below loads panel file using the CSV reader for Spark to create the panel Spark DataFrame.

For our k-means clustering algorithms, we will model for 3 clusters, so we will create a filter for 3 populations: British from England and Scotland (GBR), African Ancestry in Southwest US (ASW), and Han Chinese in Bejing, China (CHB).  We will do this by create a filterPanel DataFrame with only these three populations.  As this is a small panel, we are also broadcasting it to all the executors will result in less data shuffling when we do further operations, thus it will be more efficient.

Using the command below, we will load the genotypes of our three populations.  This can be done more efficiently in parallel because the filtered panel is loaded in memory and broadcasted to all the nodes (i.e. bPanel) while the parquet files containing the genotype data enable predicate pushdown to the file level. Thus, only the records we are interested in are loaded from the file.

The notebook contains a number of additional steps including:

Ultimately, the genotypes for the 805 variants we have left in our data will be the features we use to predict the geographic population.  Our next step is to create a features vector and DataFrame to run k-means clustering.

With the above preparation steps, running k-means clustering against the genome sequence data is similar to the k-means example in the Spark Programming Guide.

Now that we have our model - clusters - let’s predict the populations and compute the confusion matrix.  First, we perform the task of creating the predictionRDD which contains the original value (i.e. that points to the original geographic population location of CHB, ASW, and GBR) and utilizes clusters.predict to output the model’s prediction of the geo based on the features (i.e. the genome variants).  Next, we convert this into the predictDF DataFrame making it easier to query (e.g. using the display() command, running R commands in the subsequent cell, etc.).  Finally, we join back to the filterPanel to obtain the original labels (the actual geographic population location).

Below is the graphical representation of the output between the predicted value and actual value.

A quick example of how to calculate the confusion matrix is to use R.  While this notebook was primarily written in Scala, we can add a new cell using %r indicating that we are using the R language for our query.

Within the notebook, there is also additional SQL code to join the original sample, geographic population, population code, and predicted code so you can map the predictions down to the individual samples.

Visualizing the Clusters with a Force Graph on Lightning-Viz

A fun way to visualize these k-means cluster is to use the force graph via Lightning-Viz.  The notebook contains the Python code used to create the lightning visualization.  In the animated gif below, you can see the three clusters representing the three populations (top left: 2, top right: 1, bottom: 0).  The predicted cluster memberships are the vertices of the cluster while the different colors represent the population. Clicking on the population shows the sampleID, color (actual population), and the predicted population (line to the vertices).

In this post, we have provided a primer of genome sequencing (Genome Sequencing in a Nutshell) and the complexities surrounding variant analysis (Parallelizing Genome Variant Analysis).  With the introduction of ADAM, we can process variants in a distributed parallelizable manner significantly improving the performance and accuracy of the analysis.  This has been demonstrated in the Genome Variant Analysis by performing K-Means on ADAM data using Apache Spark notebook which you can run for yourself in Databricks Community Edition.   The promise of genome variant analysis is that we can identify individuals who are predisposed to common diseases, solve rare diseases, and provide personalized treatments.  Just as we have seen the massive drop in cost and time with massively parallel sequencing, massively parallel bioinformatic analysis will help us to handle reproducible analysis of the rising deluge of sequence data, and may even contribute to methods of analysis that are currently not available. Ultimately, it will contribute to progress in medicine.