This blog post describes our experience debugging a failing test case caused by a cross join query running “too fast.” Because the root cause of fail test case spans across multiple layers—from Apache Spark to the JVM JIT compiler— we wanted to share our analysis in this post.

Spark as a compiler

The vast majority of big data SQL or MPP engines follow the Volcano iterator architecture that is inefficient for analytical workloads. Since Spark 2.0 release, the new Tungsten execution engine in Apache Spark implements whole-stage code generation, a technique inspired by modern compilers to collapse the entire query into a single function. This JIT compiler approach is a far superior architecture than the row-at-a-time processing or code generation model employed by other engines, making Spark one of the most efficient in the market. Our earlier blog post demonstrated that Spark 2.0 was capable of producing a billion records a second on a laptop using its broadcast hash join operator.

Mystery of a failing test case

While we were pretty happy with the improvement, we noticed that one of the test cases in Databricks started failing. To simulate a hanging query, the test case performed a cross join to produce 1 trillion rows.

On a single node, we expected this query would run infinitely or "hang." To our surprise, we started seeing this test case failing nondeterministically because sometimes it completed on our Jenkins infrastructure in less than one second, the time limit we put on this query.

We noticed that in one of the failing instances, the query was performing a broadcast nested loop join using 40 cores, as shown below. That is to say, each core was able to process 25 billion rows per second. As much as we enjoyed the performance improvements, something was off: the CPU was running at less than 4 GHz, so how could a core process more than 6 rows per cycle in joins? 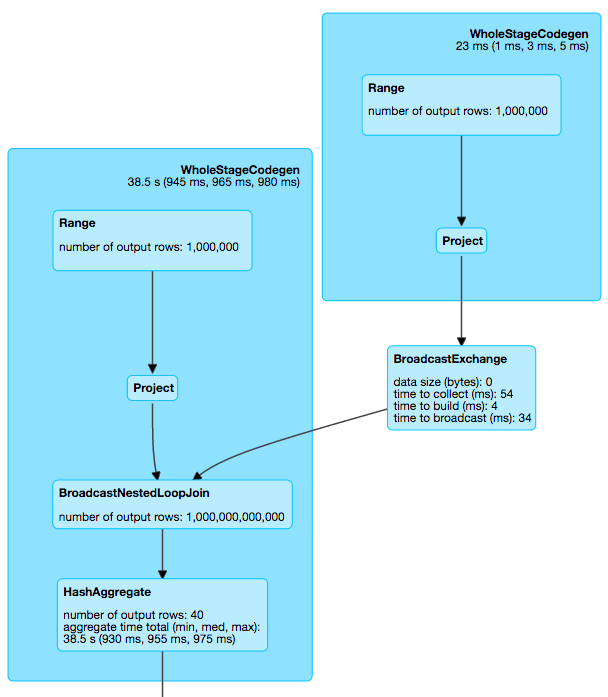 Life of a Spark query

Before revealing the cause, let’s walk through how Spark’s query execution works.

Prior to whole-stage code generation, each physical plan is a class with code defining the execution. With whole-stage code generation, all the physical plan nodes in a plan tree work together to generate Java code in a single function for execution. This Java code is then turned into JVM bytecode using Janino, a fast Java compiler. Then JVM JIT kicks in to optimize the bytecode further and eventually compiles them into machine instructions.

In this case, the generated Java code looked like the following (simplified for illustration):

Our first guess was that JVM JIT was smart enough to eliminate the inner loop, because JIT analyzed the bytecode and found the inner loop had no side effect other than incrementing some counters. In that case, JIT would rewrite the code into the following:

This would turn an operation that is O(outer * inner) to just O(outer). To verify this, we used the flag -XX:PrintAssembly to dump the assembly code by JIT, and inspected the assembly code. A shortened version of the generated assembly looks like the following (annotation added by us; you can find the full version here):

The assembly is a bit verbose, but it is easy to notice that the agg_value1 += 1 instruction was implemented using both add 0x01 and add 0x10 assembly instructions. This suggests the inner loop was unrolled with a factor of 16, after which further optimizations were possible. Since bnlj_broadcast.length might not be a multiple of 16, add 0x01 instructions are still needed to finish the loop.

So what really happened was that the nested loops were rewritten as following:

What we learned and our takeaways

Mystery solved. Would this particular optimization matter in practice? Probably not, unless you are running a query that counts the output of cross joins.

However, we found the experience and cause fascinating and wanted to share with the curious. Without implementing a specific optimization rule to unroll the inner loop, we gained this optimization because it existed in another layer of abstraction, namely JVM JIT. Another interesting takeaway is that with multiple layers of optimizations, performance engineering can be quite challenging, and extreme care must be taken when designing benchmarks to measure the intended optimization, as optimizations in other layers might bring unexpected speedups and lead to incorrect conclusions.

The broadcast nested loop join improvement is, nonetheless, generally applicable, and all Databricks customers will automatically get this optimization in the next software update.