For a deeper dive on these benchmarks, watch the webinar featuring Reynold Xin.

Performance is often a key factor in choosing big data platforms. Given SQL is the lingua franca for big data analysis, we wanted to make sure we are offering one of the most performant SQL platforms in our Unified Analytics Platform.

In this blog post, we compare Databricks Runtime 3.0 (which includes Apache Spark and our DBIO accelerator module) with vanilla open source Apache Spark and Presto on in the cloud using the industry standard TPC-DS v2.4 benchmark. In addition to the cloud setup, the Databricks Runtime is compared at 10TB scale to a recent Cloudera benchmark on Apache Impala using on-premises hardware. In this case, only 77 of the 104 TPC-DS queries are reported in the Impala results published by Cloudera.

The summary of results reveal that:

To reproduce this benchmark, you can get all the scripts from here.

Created by a third-party committee, TPC-DS is the de-facto industry standard benchmark for measuring the performance of decision support solutions. According to its own homepage, it defines decision support systems as those that examine large volumes of data, give answers to real-world business questions, execute SQL queries of various operational requirements and complexities (e.g., ad-hoc, reporting, iterative OLAP, data mining), and are characterized by high CPU and IO load.

This benchmark includes 104 queries that exercise a large part of the SQL 2003 standards - 99 queries of the TPC-DS benchmark, four of which with two variants (14, 23, 24, 39) and “s_max” query performing a full scan and aggregation of the biggest table, store_sales. As discussed in an earlier blog post, Spark SQL is one of the few open source SQL engines that are capable of running all TPC-DS queries without modification.

We conducted this experiment using the latest Databricks Runtime 3.0 release and compared it with a Spark cluster setup on another popular cloud data platform for AWS. Databricks Runtime augments Spark with an IO layer (DBIO) that enables optimized access to cloud storage (in this case S3).

Cloud storage for optimal Spark performance is different from Spark on-prem HDFS, as the cloud storage IO semantics can introduce network latencies or file inconsistencies — in some cases unsuitable for big data software. But with Spark on Databricks, we eliminate both. 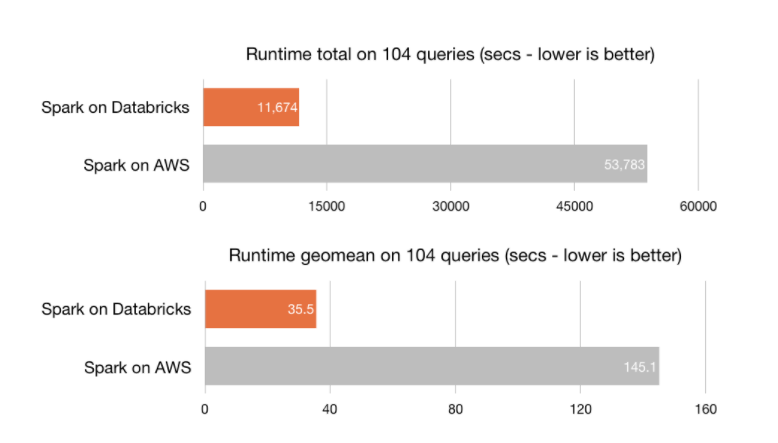 As illustrated above, Spark on Databricks performed roughly 5X better in total runtime and 4X better in geometric mean. Next, we explain more details of the benchmark setup.

Hardware Configuration: We used the following setup on Amazon EC2:

Dataset: TPC-DS 1,000 scale factor, on S3. We chose this instead of scale factor 10000 because Presto, compared in the next section, had severe issues scaling up.

Query Rewrites: No query rewrite was done. Both Spark SQL flavors were capable of running all 104 queries.

To further analyze the query results, we also divided the queries into three categories:

Because interactive queries were bottlenecked by the latency of metadata discovery, we observed only a 3X speedup, whereas the reporting and deep analytics queries benefited immensely from optimized DBIO. Future versions of DBIO will also improve the latency of metadata discovery substantially to improve interactive queries even more.

Using the same hardware configuration, we also compared Databricks Runtime with Presto on AWS, using the same vendor to set up Presto clusters.

Databricks in the Cloud vs Apache Impala On-prem

Apache Impala is another popular query engine in the big data space, used primarily by Cloudera customers. Cloudera publishes benchmark numbers for the Impala engine themselves. The most recent benchmark was published two months ago by Cloudera and ran only 77 queries out of the 104.

In this experiment, we asked ourselves: how does the Databricks Runtime in a cloud setup compares to the Impala results on physical hardware? What if we compare using out-of-the-box configuration of Databricks to Impala tuned by the engineering team behind the product, and the set of cherry-picked queries? Moreover, what is the performance of Spark on S3 to Impala with physical disks? This section presents the result from this experiment.

Query Rewrites: None, but the set of 77 queries selected by the Cloudera team excluded some of the most demanding queries in TPC-DS.

Configuration Tuning: None on Databricks; we ran with out-of-the-box configuration. Unknown for what was done in the Cloudera benchmark, as it was not reported (look at the comments).

All 104 queries completed at the 10000 scale factor in 19990 seconds. The following chart compares the runtime for the 77 queries picked by Cloudera in their report:

In the case where we take the number of CPUs as a normalization factor, Databricks Runtime, using commodity hardware in the cloud, is 3X more efficient than Impala:

Databricks Runtime achieves better performance to the numbers published by Cloudera on Impala, on queries picked by Impala’s engineering team, using a cluster with only half of the physical CPU cores. One important factor these numbers alone don’t highlight is that Databricks experiment was run against data in S3, using decoupled storage and compute, which adds elasticity and ease of management compared to local disks, as done in the Impala benchmark.

In an earlier blog post comparing S3 vs HDFS, we came to the conclusion that S3 has a much lower total cost of ownership, while HDFS might have better performance on a per node basis. This benchmark result has shown that with our optimizations, it is possible to have the best of both worlds: flexibility and lower TCO of the cloud, with better than on-prem performance, and with a broader set of ANSI SQL support.

This blog post reports the benchmark we have conducted comparing Databricks Runtime 3.0 with other big data engines, including vanilla Apache Spark and Presto in the cloud. Even after improving the Spark configuration in Spark on AWS, Databricks Runtime outperforms vanilla Spark by 5X using the same hardware specs.

When compared to Presto, Databricks Runtime performed 8X better, while being able to run all queries. Presto could run only 62 out of the 104 queries, while Spark was able to run the 104 unmodified in both vanilla open source version and in Databricks.

Additionally to the cloud results, we have compared our platform to a recent Impala 10TB scale result set by Cloudera. While the results were from an on-prem cluster, Databricks Runtime outperforms the on-premises Impala by 3X on the queries picked in the report to the same number of CPU cores. Databricks Runtime test uses S3 as storage with the additional cloud elasticity leading to lower TCO than on-prem.

For a deeper dive on these benchmarks, watch the webinar featuring Reynold Xin.