Today many data science (DS) organizations are accelerating the agile analytics development process using Databricks notebooks.  Fully leveraging the distributed computing power of Apache Spark™, these organizations are able to interact easily with data at multi-terabytes scale, from exploration to fast prototype and all the way to productionize sophisticated machine learning (ML) models.  As fast iteration is achieved at high velocity, what has become increasingly evident is that it is non-trivial to manage the DS life cycle for efficiency, reproducibility, and high-quality. The challenge multiplies in large enterprises where data volume grows exponentially, the expectation of ROI is high on getting business value from data, and cross-functional collaborations are common.

In this blog, we introduce a joint work with Iterable that hardens the DS process with best practices from software development.  This approach automates building, testing, and deployment of DS workflow from inside Databricks notebooks and integrates fully with MLflow and Databricks CLI. It enables proper version control and comprehensive logging of important metrics, including functional and integration tests, model performance metrics, and data lineage. All of these are achieved without the need to maintain a separate build server. 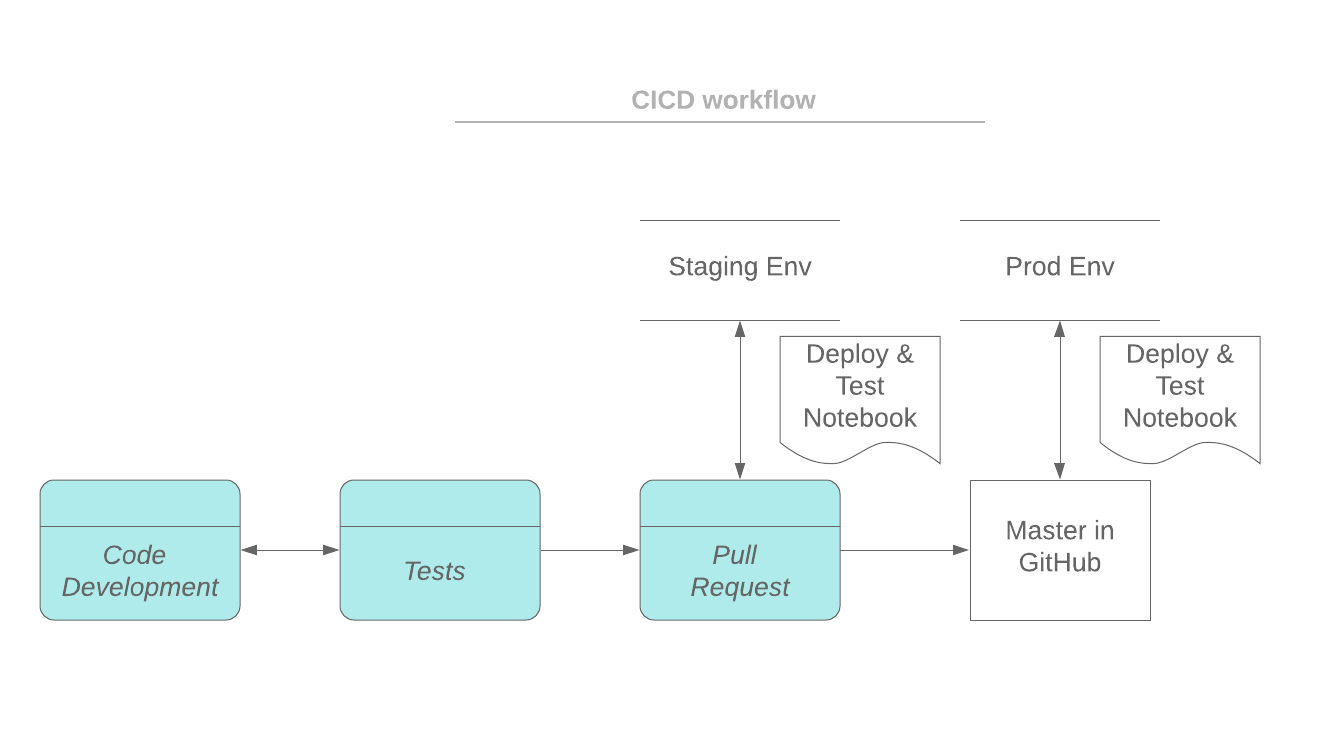 In our approach, the driver of the deployment and testing processes is a notebook. The driver notebook can run on its own cluster or a dedicated high-concurrency cluster shared with other deployment notebooks. The notebooks can be triggered manually or they can be integrated with a build server for a full-fledged CI/CD implementation. The input parameters include the deployment environment (testing, staging, prod, etc), an experiment id,  with which MLflow logs messages and artifacts, and source code version. 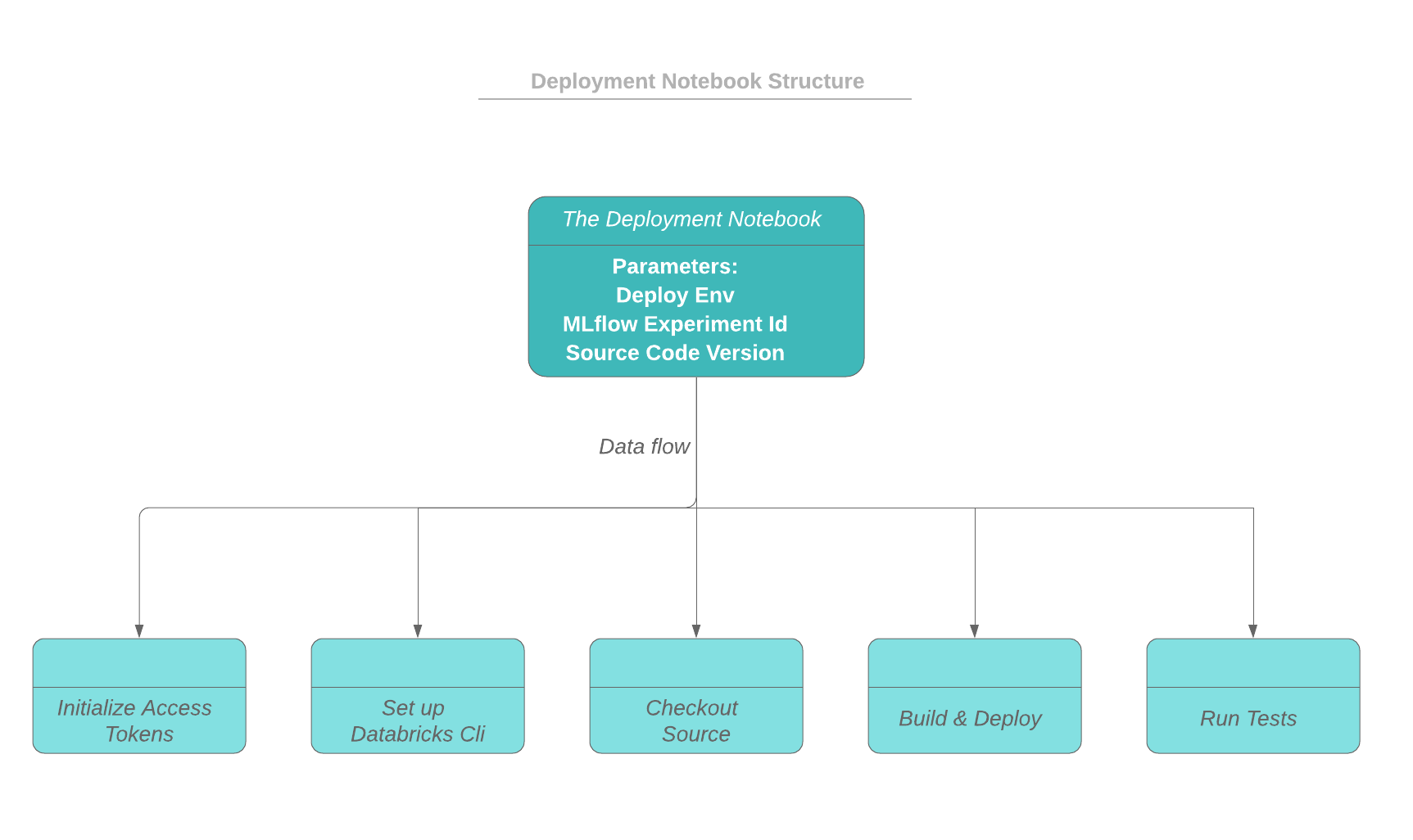 As depicted in the workflow below, the driver notebook starts by initializing the access tokens to both the Databricks workspace and the source code repo (e.g. github). The building and deploying process runs on the driver node of the cluster, and the build artifacts will be deployed to a dbfs directory. The deploy status and messages can be logged as part of the current MLflow run.

After the deployment, functional and integration tests can be triggered by the driver notebook. The test results are logged as part of a run in an MLflow experiment. The test results from different runs can be tracked and compared with MLflow. In this blog, python and scala code are provided as examples of how to utilize MLflow tracking capabilities in your tests.

First of all, a uuid and a dedicated work directory is created for a deployment so that concurrent deployments are isolated from each other.  The following code snippet shows how the deploy uuid is assigned from the active run id of an MLflow experiment, and how the working directory is created.

One way to protect your tokens is to store the tokens in Databricks secrets. A scope needs to be created first:

To store a token in a scope:

To access the tokens stored in secrets, dbutils.secrets.get can be utilized. The fetched tokens are displayed in notebooks as [REDACTED]. The permission to access a token can be defined using Secrets ACL. For more details about the secrets API, please refer to Databricks Secrets API.

The following code snippet shows how secrets are retrieved from a scope:

The following code snippet shows how to check out the source code from Github given a code version. The building process is not included but can be added after the checkout step. After that, the artifact is deployed to a dbfs location, and notebooks can be imported to Databricks workspace.

For visibility into the state of our deployment, we normally might store that in a database or use some sort of managed deployment service with a UI. In our case, we can use MLflow for those purposes.

The metadata such as deploy environment, app name, notes can be logged by MLflow tracking API:

Now that we have deployed our notebooks into our workspace path, we need to be able to trigger the correct version of the set of notebooks given the environment. We may have notebooks on version A in the prd environment while simultaneously testing version B in our staging environment.

Every deployment system needs a source of truth for the mappings for the “deployed” githash for each environment. For us, we leverage Databricks Delta since it provides us with transactional guarantees.

For us, we simply look up in the deployment delta table the githash for a given environment and run the notebook at that path.

At Iterable, we needed to move quickly and avoid setting up the heavy infrastructure to have a deployment and triggering system if possible. Hence we developed this approach with Li at Databricks such that we could conduct most of our workflow within Databricks itself, leverage Delta as a database, and use MLflow for a view for the state of truth for deployments.

Because our data-scientists work within Databricks and can now deploy their latest changes all within Databricks, leveraging the UI that MLflow and Databricks notebooks provide, we are able to iterate quickly while having a robust deployment and triggering system that has zero downtime between deployments.

Tests and validation can be added to your notebooks by calling assertion statements. However error messages from assertion scatter across notebooks, and there is no overview of the testing results available. In this section, we are going to show you how to automate tests from notebooks and track the results using MLflow tracking APIs.

The picture below shows a screenshot of an experiment of MLflow, which contains testing results from different runs. Each run is based on a code version (git commit), which is also logged as a parameter of the run. 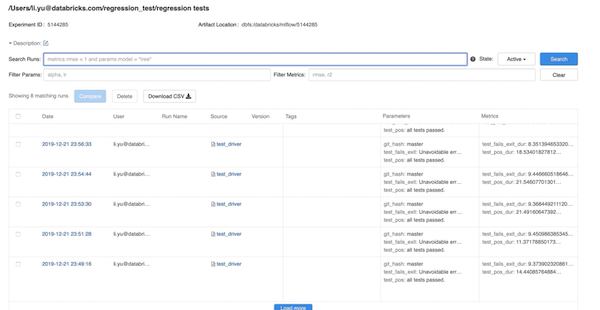 The MLflow UI provides powerful capabilities for end-users to explore and analyze the results of their experiments. The result table can be filtered by specific parameters and metrics. Metrics from different runs can be compared and generate a trend of the metric like below:

Unit tests of individual functions are also tracked by MLflow. A common testing fixture can be implemented for logging metadata of tests. Test classes will inherit this common fixture to include MLflow tracking capability to the tests. Our current implementation is based on ScalaTest, though similar implementation can be done with other testing framework as well.

In this blog, we have reviewed how to build a CI/CD pipeline combining the capability of Databricks CLI and MLflow. The main advantages of this approach are:

With this approach, you can quickly set up a production pipeline in the Databricks environment. You can also extend the approach by adding more constraints and steps for your own productization process.