We’re thrilled to announce that the pandas API will be part of the upcoming Apache Spark™ 3.2 release. pandas is a powerful, flexible library and has grown rapidly to become one of the standard data science libraries. Now pandas users will be able to leverage the pandas API on their existing Spark clusters.

pandas users will be able scale their workloads with one simple line change in the upcoming Spark 3.2 release:

Scalability beyond a single machine

One of the known limitations in pandas is that it does not scale with your data volume linearly due to single-machine processing. For example, pandas fails with out-of-memory if it attempts to read a dataset that is larger than the memory available in a single machine:

The pandas API on Spark also scales well to large clusters of nodes. The chart below shows its performance when analyzing a 15TB Parquet dataset with different-sized clusters. Each machine in the cluster has 8 vCPUs and 61 GiBs memory.

Distributed execution of pandas API on Spark scales almost linearly in this test. The elapsed time decreases by half when the number of machines within a cluster doubles. The speedup compared to a single machine is also significant. For example, on the Standard deviation benchmark, a cluster of 256 machines can process ~250 times more data than a single machine in roughly the same time (each machine has 8 vCPUs and 61 GiBs memory):

The pandas API on Spark often outperforms pandas even on a single machine thanks to the optimizations in the Spark engine. The chart below demonstrates pandas API on Spark compared to pandas on a machine (with 96 vCPUs and 384 GiBs memory) against a 130GB CSV dataset:

Both multi-threading and Spark SQL Catalyst Optimizer contribute to the optimized performance. For example, Join count operation is ~4 times faster with the whole-stage code generation: 5.9s without code generation, 1.6s with code generation.

Spark has an especially significant advantage in chaining operations. The Catalyst query optimizer can recognize filters to skip data wisely and can apply disk-based joins, while pandas tend to load all data into memory per step.

Considering a query that joins two filtered frames and then computes the mean of the joined frame, pandas API on Spark succeeds within 4.5s, whereas pandas fails because of the OOM(Out of memory) error as below:

pandas uses matplotlib by default, which provides static plot charts. For example, the codes below generates a static chart: 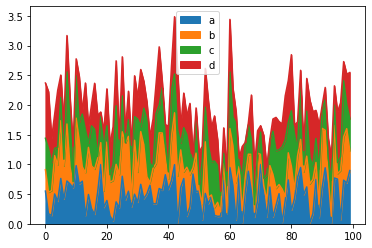 pandas is designed for Python data science with batch processing, whereas Spark is designed for unified analytics, including SQL, streaming processing and machine learning. To fill the gap between them, the pandas API on Spark provides many different ways for advanced users to leverage the Spark engine, for example:

See also the blog post about the interoperability between PySpark and pandas API on Spark.

For the next Spark releases, the roadmap focuses on:

• More type hints
The code in the pandas API on Spark is currently partially typed, which still enables static analysis and auto-completion. In the future, all of the code will be fully-typed.

• Performance improvements
There are several places in pandas API on Spark where we can improve performance further by more closely interacting with the engine and SQL optimizer.

• Stabilization
There are several places to fix especially related to missing values such as NaN and NA have the corner cases of behavior differences.

In addition, the pandas API on Spark will follow and match its behavior to the latest version of pandas in these cases.

• More API coverage
The pandas API on Spark reached 83% coverage of the pandas API, and this number continues to increase. Now the target is up to 90%.

Please file an issue if there are bugs or missing features that you need, and of course, we always welcome contributions from the community.

If you want to try out pandas API on Spark in Databricks Runtime 10.0 Beta (upcoming Apache Spark 3.2), sign up for Databricks Community Edition or Databricks Trial for free and get started in minutes.

October 4, 2021 by Hyukjin Kwon and Xinrong Meng in Engineering Blog
We’re thrilled to announce that the pandas API will be part of the upcoming Apache Spark™ 3.2 release. pandas is a powerful, flexible lib...
See all Engineering Blog posts