Quick recap: What is a feature?

In machine learning, a feature is an attribute - or measurable characteristic - that is relevant to making a prediction. For example, in a machine learning model trying to predict traffic patterns on a highway, the time of day, day of the week, and throughput of cars can all be considered features. However, real-world data requires a significant amount of preprocessing, wrangling, and transformations to become usable for machine learning applications. For example, you may want to remove highly correlated input data or analyze language prior to feeding that data into your model as a feature. The process of making raw data machine learning-ready is called feature engineering.

The challenges of feature engineering

Feature engineering is complex and time-consuming. As organizations build and iterate on more machine learning models, it becomes increasingly important that already-built features can be discovered, shared, and reused. Good feature-reuse practices can save data teams weeks. But once features are being re-used, it is critical that their real-world performance is tracked closely. Quite often, a feature computation used in training may deviate from the one used in production, which leads to a skew in predictions, resulting in degraded model quality. It’s also critical to establish feature lineage - to track which models are using what features and the data going into these features.

Many of our customers have told us that a good feature development platform can significantly accelerate model development time, eliminate duplicate data pipelines, improve data quality, and help with data governance.

The first of its kind, Databricks Feature Store is co-designed with popular open source frameworks Delta Lake and MLflow. Delta Lake serves as an open data layer of the feature store, and MLflow format makes it possible to encapsulate interactions with the feature store in the model package, simplifying deployment and versioning of the models. Building upon these unique differentiators Databricks Feature Store delivers following key benefits: 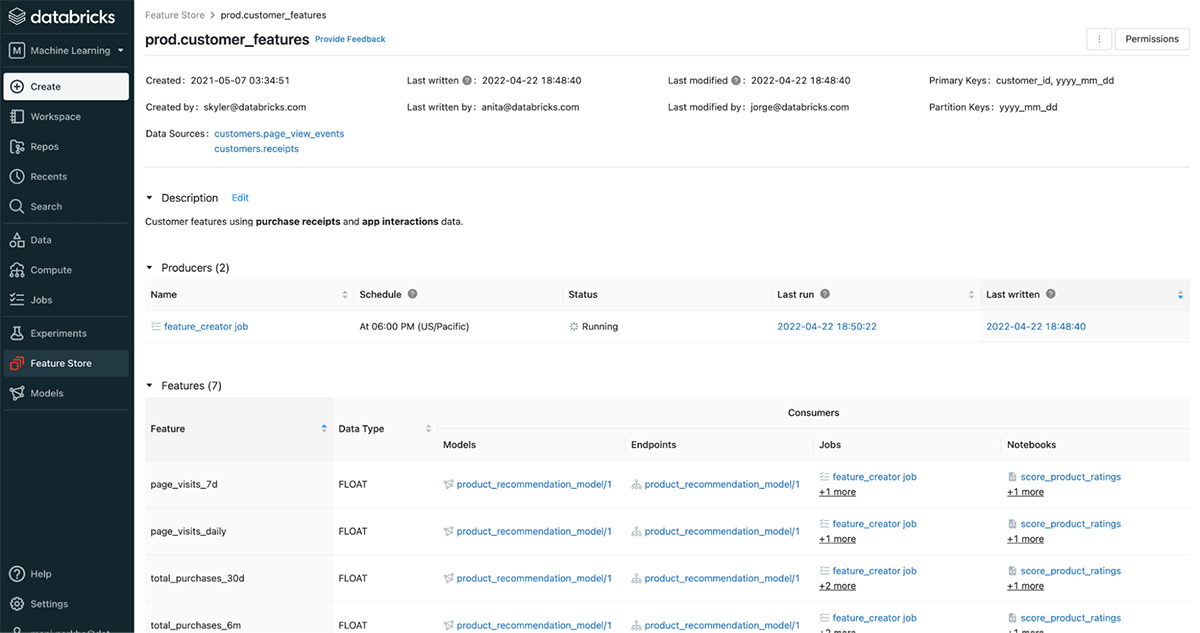 Customers win with feature store on the Lakehouse

Hundreds of customers have already deployed Databricks Feature Store to empower their production Machine Learning processes. For customers such as Via, this resulted in an increase of developer productivity by 30%, and reduction of data processing costs by over 25%.

One of the most common types of data stored in feature stores is time-series data. It is also the type of data that requires the most careful handling. Slightest misalignment of data points in joins over time dimension results in data leakage from the future of the time-series which erodes model performance in ways that are not always easy to detect. Manually programming joins between features with different sliding time windows requires intense focus and meticulous attention to detail.

Databricks Feature Store removes this burden by providing built-in support for time-series data. Data scientists can simply indicate which column in the feature table is the time dimension and the Feature Store APIs take care of the rest. In model training, the dataset will be constructed using a set of correct AS-OF joins. In batch inference, packaged MLflow models will perform point-in-time lookups. In online serving, the Feature Store will optimize storage by publishing only the most recent values of the time-series and automatically expiring the old values.

Next, we’ll create a training dataset by joining training data from raw_clickstream dataframe with 2 features from the time-series feature table.

The training_dataset contains optimized AS-OF joins that guarantee correct behavior. This is all it takes to create a training dataset with Databricks Feature Store APIs and start training models with any ML framework.

In addition to a variety of SQL Databases already supported as online stores for feature serving, Databricks Feature Store now has support for AWS DynamoDB. For publishing time-series feature tables, you can publish to DynamoDB with a time-to-live so that stale features automatically expire from the online store. Support for Azure Cosmos DB is coming soon.

The Feature Store UI monitors the status of the data pipeline that produced the feature table and informs users if it runs stale. This helps prevent outages and provides better insights to data scientists about the quality of the features they find in the feature store.

Get more familiar with feature stores with this ebook: The Comprehensive Guide to Feature Stores

Take it for a spin! Check out the Databricks Machine Learning free trial on your cloud of choice to get your hands on the Feature Store

Check out this awesome use-case with our customer Via and the tech lead on the Feature Store: All About Feature Stores

May 27, 2021 by Clemens Mewald and Mani Parkhe in Announcements
Today, we announced the launch of the Databricks Feature Store, the first of its kind that has been co-designed with Delta Lake and...

November 23, 2020 by Ryan Boyd in Engineering Blog
As part of our Data + AI Online Meetup, we’ve explored topics ranging from genomics (with guests from Regeneron) to machine learning pipelines a...

June 5, 2020 by Michael Shtelma and Thunder Shiviah in Engineering Blog
CONTENTS Overview Why do we need yet another deployment framework? Simplifying CI/CD on Databricks via reusable templates Development lifecycle using Databricks Deployments How...
See all Platform Blog posts